‘It takes a lot to build trust’. Recognition and Telling: Developing earlier routes to help for children and young people.
The findings from the study were used to generate a conceptual framework for understanding recognition, telling and help from the point of view of the child.

The research was undertaken by Dr Jeannette Cossar, Prof Marian Brandon and Dr Darren Sharpe, and commissioned by the Children’s Commissioner. The game is based, in part, on this research, though the Commissioner has no formal role in the project and does not endorse the game. Cossar, J., Brandon, M., Bailey, S., Belderson, P., Biggart, L. and Sharpe, D. (2013) ‘It takes a lot to build trust’. Recognition and Telling: Developing Earlier Routes to Help for Children and Young People. London: Office of the Children’s Commissioner 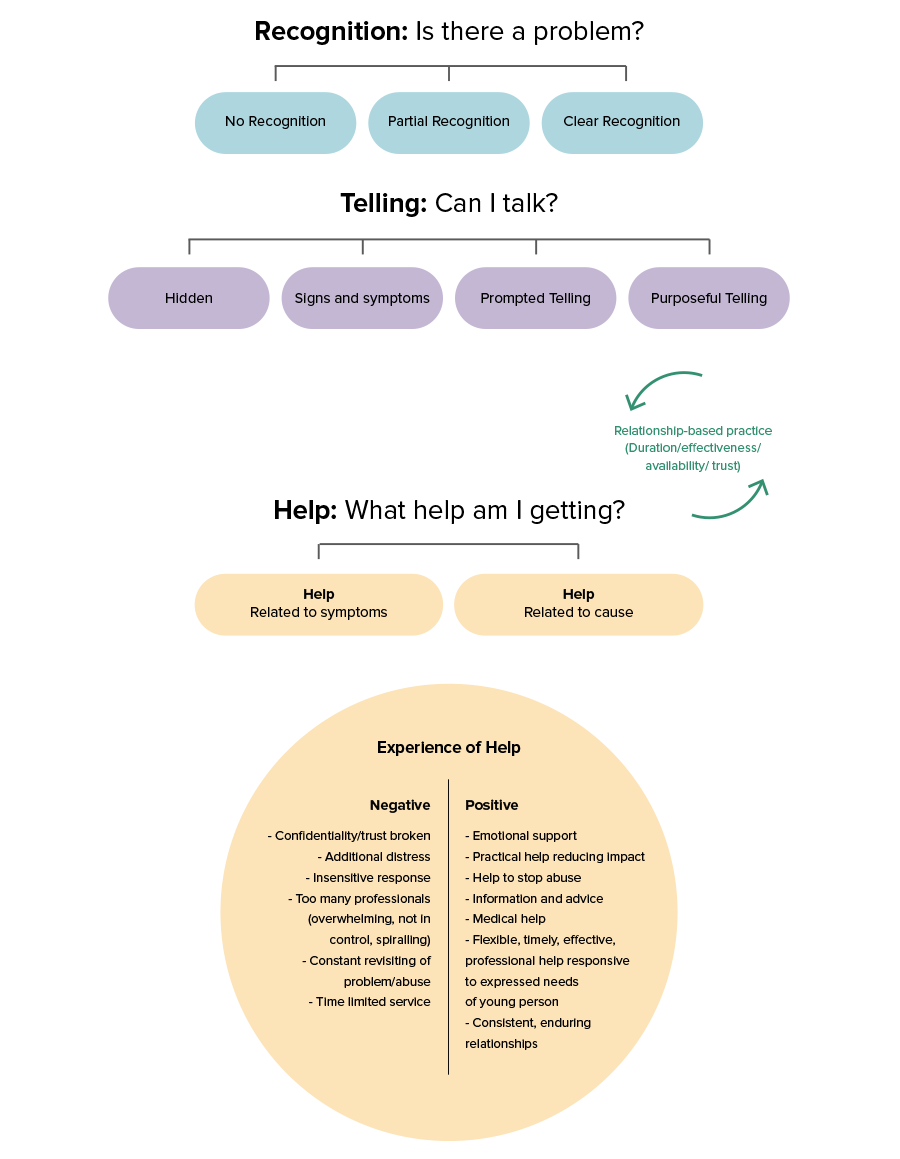 The framework contains three distinct components which can make sense of children’s and young people’s experiences. Importantly it is non-linear so that a child’s progress is not solely from the top level (recognition) towards the bottom (receiving help). Individual young people experiencing problems of abuse and neglect can follow different pathways. Crucially recognition often occurs as a result of conversations with others. Thus clear recognition does not always happen before telling or receiving help, but can sometimes be a result of help received. One logical pathway would be that a young person recognizes the abusive situation, purposefully tells someone about it and then receives help. However, in the interview study this was a rare occurrence. In fact most of the young people in the interview study followed a pathway beginning either with not recognizing or partially recognizing their situation and first came to the attention of services though the ‘signs and symptoms’ route for telling.

Their pathways were complex and positive and negative feedback loops were possible. A young person who tried to tell might receive help relating to the abuse, or they could conceivably find that their case was closed and no service was offered.

They might get help with the presenting problem that did not get to the heart of the underlying abusive situation.

Cultural norms could deter children from disclosing abuse, and address notions of shame, taboo, modesty, honour and respect. Fontes (2010) discussed these concepts in relation to child sexual abuse across a number of cultural settings. Interviews in Italy with adolescent child abuse victims revealed shame, and a fear of causing trouble to the family, to be strong barriers to telling (Crisma et al, 2004). ‘Family shame’ and ‘courtesy and face’ were important concepts in a study of Hong Kong Chinese children suffering from abuse and neglect (Chan, 2011). African American young people and Hispanic girls have been found to be less likely to disclose sexual abuse than their white American peers (Hanson et al, 2003, London et al, 2005). The under reporting of child sexual abuse in Britain’s Asian communities was compounded by notions of honour/respect (izzat), modesty (haya), and shame or embarrassment (sharam), (Gilligan et al, 2006).

The authors concluded, however, that practice based on generalized assumptions about ethnicities, cultures or religions, was to be avoided. There was some evidence that children, and particularly black children, disclosed secrets more readily to an interviewer of the same race (Dunkerley, 2000).

A study in detail

EU Agenda for the Rights of the Child.pdf

EU Guidelines for the Promotion and Protection of the Rights of the Child.pdf

It takes a lot to build trust (FINAL REPORT).pdf

From the game stories

A form of abuse which may involve hitting, shaking, throwing, poisoning, burning or scalding, drowning, suffocating or otherwise causing physical harm to a child. Physical harm may also be caused when a parent or carer fabricates the symptoms of, or deliberately induces, illness in a child.
more…

The persistent emotional maltreatment of a child such as to cause severe and persistent adverse effects on the child’s emotional development. It may involve conveying to a child that they are worthless or unloved, inadequate, or valued only insofar as they meet the needs of another person. It may include not giving the child opportunities to express their views, deliberately silencing them or ‘making fun’ of what they say or how they communicate. It may feature age or developmentally inappropriate expectations being imposed on children. These may include interactions that are beyond a child’s developmental capability, as well as overprotection and limitation of exploration and learning, or preventing the child participating in normal social interaction. It may involve seeing or hearing the ill-treatment of another. It may involve serious bullying (including cyberbullying), causing children frequently to feel frightened or in danger, or the exploitation or corruption of children. Some level of emotional abuse is involved in all types of maltreatment of a child, thought it may occur alone
more…

Involves forcing or enticing a child or young person to take part in sexual activities, not necessarily involving a high level of violence, whether or not the child is aware of what is happening. The activities may involve physical contact, including assault by penetration (for example, rape or oral sex) or non-penetrative acts such as masturbation, kissing, rubbing and touching outside of clothing. They may also include non-contact activities such as involving children in looking at, or in the production of, sexual images, watching sexual activities, encouraging children to behave in sexually inappropriate ways, or grooming a child in preparation for abuse (including via the internet). Sexual abuse is not solely perpetrated by adult males. Women can also commit acts of sexual abuse, as can other children.
more…

The persistent failure to meet a child’s basic physical and/or psychological needs, likely to result in the serious impairment of the child’s health or development. Neglect may occur during pregnancy as a result of maternal substance misuse. Once a child is born, neglect may involve a parent or carer failing to:

It may also include neglect of, or unresponsiveness to, a child’s basic emotional needs.
more…

© European Union, 2016
The information and views set out in this website and playful tool are those of the project directors and do not necessarily reflect the official opinion of the European Union. Neither the European Union institutions and bodies nor any person acting on their behalf may be held responsible for the use which may be made of the information contained therein.
Game Design and Development by Open Lab
Providing applied and educational games to companies, institutions and research centres.